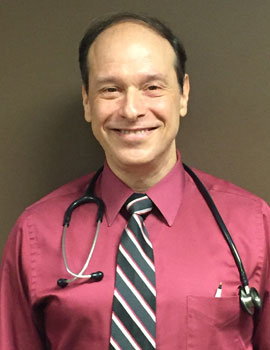 Jon Stevens, Nurse Practitioner, joined Central Arizona Heart Specialists in 2009. He has served Arizona communities since 1989 in private practices, hospitals, retirement centers and the Arizona State Prison System and as an instructor at Central Arizona College in the focus of Critical Care, cardiac medicine, and education.

Mr. Stevens received his Associate in Applied Sciences Degree from Phoenix College and earned his Bachelor of Science, Master’s in Science, and his Post Master’s in Science in Nursing Degrees from Arizona State University. He is ACLS Certified and has been published in the 2008 Directory of Certified Nurses produced by ANCC.

Amongst his accomplishments throughout his career, Mr. Stevens has served on the Nursing Grand Rounds Committee as both a member and a speaker. He has served as a volunteer speaker for several elementary schools on health issues and at the CNA Expo 1995. He was developmental in producing multiple curriculums for Maricopa County Regional Medical Center and is heavily involved various curriculum programs throughout Arizona community colleges and hospitals.

He received a Lifetime Teaching Certificate from Maricopa Community Colleges and has been the recipient of the Linda Kay Jones Memorial Scholarship and has furthered his education in the areas of pacemaker evaluations and training and oversees the Latitude and Pacemaker Clinics for the practice: programs that have become a growing value to both patients and providers.